Amira Willighagen is a prodigy opera singer from the Netherlands; Born on March 27, 2004, she managed to win the final of Holland’s Got Talent (2013) at the age of 9. Amira Willighagen is a perfect example of talent and genius, because she taught herself how to sing opera by watching Youtube videos. This might not seem like a big deal… but it is. Singing opera is the “Olympic level” of singing and one doesn’t simply become an Olympic Athlete by watching Youtube videos. Words can’t do justice to Amira’s talent, so please watch her audition to Holland’s Got Talent.

I am not sure if Amira is a common name in the Netherlands, but in Arabic, Amira means princess… she is a princess :). Amira’s dad is dutch and her mom is South African (probably from Dutch origin as well), her brother plays the Violen, so Amira is probably not the only member of the family carrying an extra-ordinary talent.

It is hard to find enough information about young and rising artists likes Amira, but one thing is abundantly clear; Amira sings because she loves singing; she doesn’t sing for fame or for money.

According to Wikipedia, Amira donates half the revenue she makes from performances and from selling her Album titled “Amira” to her own charity project which aims at building playgrounds for poor children in her mom’s home country, South Africa.

Finally, :), I will leave you with my favorite song from Amira’s first and only Album “so far”. 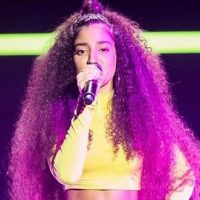 Beauty and the Brains. A blog about young talents!